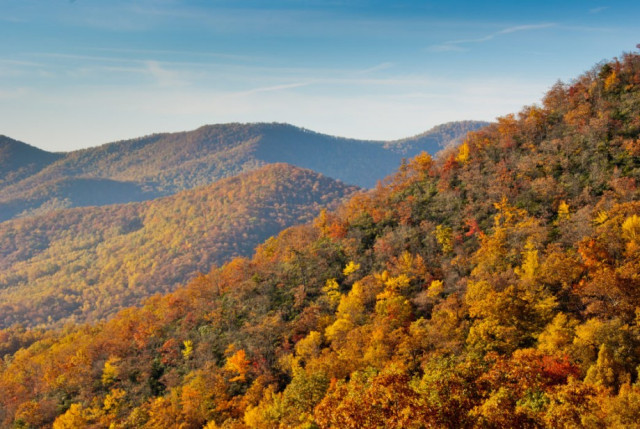 Every fall, North Carolina’s wild spaces blush with vivid seasonal colors, beginning in the state’s high peaks and spreading slowly across the lowlands to finally reach the Atlantic Coast. One of the best ways to soak up the vibrant fall foliage is to spend a night under the stars, reveling in the welcome arrival of crisply cool autumn temperatures. Fortunately, North Carolina is peppered with plenty of wilderness-enveloped campgrounds, from the Great Smokies to the state’s Atlantic shores.

North Carolina’s 252-mile portion of the Blue Ridge Parkway is one of the most colorful leaf-peeping portals in the country. The lofty peaks lining the roadway are also the first places in the state to flush with autumn color, making for a dramatic fall palette. Along North Carolina’s section of the parkway you’ll find five scenic seasonal campgrounds, but there are several standout gems (all open from May through October).

At milepost 297, the Julian Price Campground features a handful of sites scattered along the shores of Price Lake (if possible, try to snag one on the A Loop). The gentle, 2.7-mile Price Lake Trail also weaves through the campground and rings the lake, providing plenty of scenic, waterside photo ops.

Farther down the road, at milepost 408.8, the Mount Pisgah Campground is the loftiest of the camping areas lining the Blue Ridge Parkway, offering campsites located at 4,980 feet. Besides the alpine aesthetic, the campground also serves an entryway to a plethora of recreational opportunities in the Pisgah National Forest. It’s the perfect jumping-off point for the 1.4-mile hike to the summit of 5,721-foot Mount Pisgah, where you’ll have views of the Hickory Nut, Great Craggy, Black and Great Balsam mountains chains.

In the central part of the state, the Uwharrie Mountains may not rise to the heights of the state’s other massifs, but the ancient, forest-tufted cordillera still offers a stunning seasonal display. The 51,000-acre Uwharrie National Forest features an extensive trail system, including the 20-mile Uwharrie National Recreation Trail and the 11-mile Dutchman’s Creek Trail, a route scattered with relics of the area’s previous inhabitants, including abandoned home sites, gold mines, and cemeteries—all perfect fodder for evening tales around the campfire.

The national forest’s year-round Badin Lake Campground offers 34 non-electric sites spread along the edge of Badin Lake, all with picnic tables, grills, and fire rings. Plus, the waterside camping area is also bisected by the 1.1-mile Badin Lake Trail, which is an easy leg-stretcher.

For campers eager to use fall as the final chance to flirt with the all-too-fleeting days of summer, there’s Cape Hatteras National Seashore. Thankfully, throughout the autumn the sun-saturated sand remains toasty, and water temperatures are still tolerable for swimming until almost Thanksgiving. Best of all, the throngs of summer visitors have long departed, leaving the national seashore’s pristine beaches virtually empty. Take advantage of the lack of tourists and visit iconic local landmarks like the Cape Hatteras and Bodie lighthouses. Then, be sure to head to the Pea Island National Wildlife Refuge to watch the flocks of migratory ducks, geese, and tundra swans descend on the protected area. Each year in October and December, the Wings Over Water Wildlife Festival celebrates the birds’ autumn arrival.

Scattered over the 24,470-acre Cape Hatteras National Seashore there are four different oceanside campgrounds (open from April to late November), and the Frisco Campground, located between Frisco and Buxton, allows campers to set up tents amongst the sandy dunes.

Foliage seekers also jonesing for some backcountry solitude can head for western North Carolina’s Panthertown Valley, a rugged, 6,295-acre portion of the Nantahala National Forest punctuated with secluded waterfalls and 4,000-foot peaks. Although the namesake panthers no longer prowl the sylvan wilderness dubbed the Yosemite of the East, backpackers have the opportunity to spot resident black bears, bobcats, coyotes, and hellbenders—outsized salamanders that grow to nearly 2 feet in length. The U.S. Forest Service and non-profit Friends of Panthertown maintain nearly 30 miles of trails in the backcountry area, providing plenty of options for loops and out-and-back trips. While Panthertown treats visitors with a crowd-free escape, it’s also easy to get turned around in the leafy wilderness, so it’s essentIal to bring A map like Burt Kornegay’s A Guide’s Guide to Panthertown.

The Pisgah National Forest is home to some of the Southeast’s most stunning scenery. Divided into three ranger districts, the 500,000-acre forest offers everything from rushing whitewater rivers to towering summits, including Mount Mitchell (6,684 feet), the loftiest peak east of the Mississippi. The Pisgah Ranger District is home to some of the national forest’s most beloved attractions and best fall vantage points. For instance, there’s the treeless summit of Black Balsam Knob, rising 6,215 feet above the Shining Rock Wilderness and boasting color-drenched, 360-degree views which include the Great Smokies, Cold Mountain, and the closely concentrated crests of the Mount Mitchell range.

Finding New Outdoor Pursuits When Injury Strikes Nordic Walking for a Full-Body Workout 4 Frozen Waterfalls To Explore in Western Carolina this Winter Why Cycling is a Great Sport to Pick Up in Your 50s and Where to Go Around Charlotte How to Make the Most of Charlotte's Outdoor Strength Training Circuits Paddling Around Winston-Salem: An Insider's Guide to Getting on the Water This Summer
View All Related