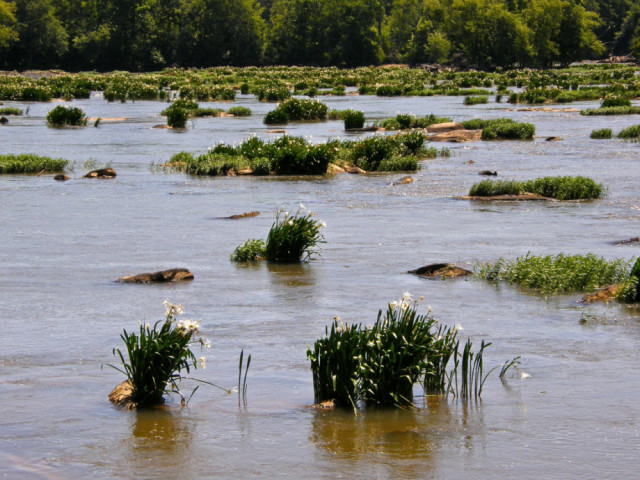 Finding yourself perusing event calendars for races that are bigger and badder than any you’ve attempted before? Or gazing out the window with visions of a paddle in your hand and the sun on your back? Diagnosis: spring fever. Prescription: step outside. Whether you sign up for a grueling, obstacle-conquering mud run or float your kayak through bucolic stands of aquatic spider lilies, now’s the time to load up your calendar with all the Instagram-worthy adventures Charlotte has to offer.

Celebrate the North Carolina Piedmont’s Scots-Irish heritage at the Loch Norman Highland Games, April 20-22 at Historic Rural Hill. It’s a weekend of bagpipes, kilts, and clan-on-clan competition on the grounds of one of the first colonial homesteads in the region. It’s not often you get to see men’s and women’s battle axe tournaments, the heavy stone lift and carry, and competition-grade tug-of-war. While you’re there, don’t miss the Celtic music and pipe bands, Scottish country dancing, Scotch whiskey tastings, and the Parade of the Tartans.

Ever want to play like a kid in a mud puddle? The Charlotte Spartan Sprint, April 7-8 at Porter Farms, is your chance. More than 20 obstacles on the 3-mile course will have you hanging, climbing, swinging, and crawling to the finish. Form a team and power through together. Either way, the mostly flat terrain and sprint distance make this a great intro to obstacle racing.

The world’s largest population of the starry-white Rocky Shoals Spider Lilies grows along the Catawba River through South Carolina’s Landsford Canal State Park. Peak blooms pop out in May for Lilyfest. While most visitors enjoy the show from the riverbanks, you’ll want a front-row seat in your kayak. Put in at the north end of the park and float the current south around the lily-infused rock ledges and Class I-II riffles to exit at the south side of the park. It’s just a 1.5-mile hike back upriver to your launch.

Watch every sport and every venue at the U.S. National Whitewater Center come alive at Tuckfest. The four-day festival, April 19-22, is named for the historic Tuckaseegee Ford and Trail that runs through the property, celebrating the outdoors with competitions, demos, exhibitions, live music (over a dozen bands in total), craft beer, and great food.

Over the years, the Latta Sprint Triathlon has become a homecoming of sorts for Charlotte triathletes. The sprint distance and June 6 event date fit well in training schedules for competitors at all levels. Novices can warm up with a short course event, and then use this race to build endurance, while more experienced athletes can train at Latta for Olympic and Ironman distances later in the season. The water in Mountain Island Lake is a balmy 80 degrees for the out-and-back swim, while the bike and run travel pleasantly flat terrain. The heavily shaded run on Latta Plantation Nature Preserve trails ends at a lakefront finish-line celebration.

Get a glimpse of Charlotte’s pedestrian-friendly future with a run on the Cross Charlotte Trail. When it’s finished, the greenway will stretch 26 miles from Pineville through downtown to University City. Start at Central Piedmont Community College (CPCC) on the southeastern edge of Uptown to log more than 6 miles to Freedom Park. Refuel with a breakfast burrito or avocado toast at The People’s Market before doubling back through Uptown to your starting point.

Test your free solo climbing chops at the Whitewater Center Aqua Rock Climbing Competition on September 1. With no ropes, harnesses, or protective gear, you’ll climb the 25- to 45-foot overhanging spires of Deep Water Solo, then free fall into the 20-foot-deep pool of water below. The competition’s open to all levels of climbers, with beginner to advanced routes and a point system to determine the winner.

The Charlotte Marathon, marks the end of the race season, so it’s a must for area distance runners. The entire weekend’s full of wellness-focused festivities, including a health and wellness expo before the race and finish line festival in Romare Bearden Park. The rolling course hits all of Charlotte’s landmarks and historic neighborhoods, with half-marathon, relay, 5K, and kid’s 1-mile options for any level of runner.

Volunteer With the Carolina Thread Trail

How would you like to be able to say you helped build a 1,500-mile trail network across 15 counties and two states? Give back to the trails you love through the Catawba Lands Conservancy. Trail building events aren’t the only way to get involved. You can become a trail ambassador, help out at fundraising events, and work on habitat restoration. If you’re looking for a long-term commitment, take the lead on trail-building projects as a Trail Master.